there was a mixed media textile artist who was married to her most dearly beloved husband, Van, who was also her photographer, webmaster, publicist, and wizard in the kitchen.  She spent her time making things and traveling around teaching people how to do what she did.  He spent his time helping others with their various and assorted computer and publishing issues, and generally keeping all the balls in the air.

Never a truly healthy person, he fell victim to cancer, and the next four years were spent consulting with a long list of medical personnel, enduring various treatments, and generally living on hope for a cure.  She left her world of art and teaching to take care of her most dearly beloved.  In the midst of this stressful time, they lost their home due to their inability to work much, and became homeless.

A month before his demise, Van’s computer empire crashed.  He was far too ill to do anything about it, and she lost her email, website, blog, photography, database – everything.  As it turned out, he also neglected to leave behind a list of his passwords, so no one else could get in and do anything about it.  But a kindly hacker tried, and some things were retrieved (mostly older work), until one day the whole mess caught fire and what was left was well and truly gone.

Van died on June 28, 2017, so I can’t say that we all lived happily ever after, but a year+ has passed and I can say that a few steps in the direction of the studio have taken place.  I have a couple of lectures and a week of teaching on the books, and I miss him every day.

While we were homeless, I did manage to create a small series with the theme of “Peace”, which I desperately needed at the time.  They all have words of peace, and those words are the titles.

That’s all for now, my little chickadees.  Be happy, create wildly, love extravagantly! 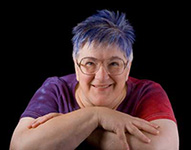